In a cavernous living room lit with the glow of 24 candles, Jenee Halstead and her band start to play. There are no wires, spotlights or microphones, simply a half circle of four musicians standing in a corner. The scene brings to mind a Depression-era campfire, not a suburban house concert a few miles south of Boston, with well-to-do guests nibbling catered barbeque and sipping wine from long-stemmed glasses.

Though the music is deep and distant, the story behind its creation is as modern as an iPhone. Using MySpace, Facebook and other technology tools of the independent music trade, talents were verified, reputations vetted and friendships cemented days, even weeks before anyone met face to face to play songs that would make Woody Guthrie smile in approval.

Or even George Clinton, as Halstead’s rapidly assembled network of bluegrass purists, an old school producer, his song doctor wife and some electronica-affected friends combined to make “The River Grace,” a pitch perfect blend of traditional picking and modern tweaking.

“It happened really quickly,” Halstead says. Soon after arriving in Boston in mid-2006, she created a MySpace page. “I had some recordings I’d done right before I left Seattle. Within literally 2 or 3 days, I got a comment from Matt Smith at Club Passim.”

Smith, who manages the venerable Cambridge folk institution, which just celebrated its 50th anniversary, told Halstead he liked her stuff and to keep in touch. He also mentioned her to some of his friends.

Meanwhile, Jenee placed an ad on the Craig’s List web site, with an eye towards putting together a band in the spirit of Crooked Still. “I always wanted to do bluegrass, but didn’t think I could because I wasn’t schooled in it.” Of her reservations about seeking out seasoned pickers, she says, “it was like walking on sacred ground.”

Guitarist Andy Cambria answered the ad. “I heard her stuff and knew right away that she could be in front of a band,” he says.

Five weeks and a flurry of e-mails later, they were playing together.

Halstead divided her time between building a name in Boston and recording an album in Pennsylvania. The solo acoustic project collapsed in a cloud of romantic confusion with the record’s producer. “Trying to decide if we were going to be a couple … got too difficult,” she says. “It was disheartening to lose all that work, all those hours.” 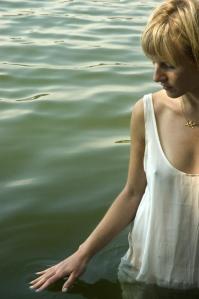 “Out of the blue, I got an email from Evan Brubaker, saying Matt Smith told me to check you out.” Though she had long lived in the same city as the producer, Smith’s e-mail was their first introduction.

“I’m totally horrified that you lived in Seattle for nine years and I never knew about you,” wrote Brubaker to Halstead.

“I was instantly drawn to her mixture of old time and poetry,” says Brubaker. “I let her know that if she ever needed to do some recording, I would be honored.”

Halstead’s songs are at once beautiful and tinged with night-sweat inducing dread – Appalachian gothic tales of fear, suffering and salvation. Things aren’t simple, meanings are never quite clear.

Though she describes herself as “non-religious but spiritual,” themes of heaven and hell abound. Death is a constant companion.

If Flannery O’Connor were raised in Spokane, Washington, listening to her father’s Led Zeppelin albums, she might have sounded like this.

On the title track from “The River Grace,” a woman struggles to live in a time of war. When, at the song’s bridge, she implores, “embrace the undertow/take me home,” it’s not certain whether she’s praying to be carried across the waves or beneath them.

A crime spree at the heart of “Darkest Day” echoes Robert Earl Keen’s “Road Goes on Forever,” but the tragedy at song’s end is more palpable, the heroine’s devastation permanent.

Then there’s “Dusty Rose,” a song that seems lifted from Loretta Lynn’s Jack White sessions. It’s either a murder ballad or the final sad chapter of “Stand By Your Man” – the singer won’t tell.

Halstead – her first name rhymes with Renee – says her songs are “stories of people’s lives that came to me subconsciously.” Whether the narrator of “Dusty Rose” is a killer or a grieving widow is something she emphatically doesn’t know.

“These are not my stories,” she says. “There’s some woman out there who owns that song. I don’t know who she is.”

“It’s a healing thing to let them go,” she continues, and let others decide their meaning.

That’s a sentiment she shares with another songwriter, Patty Griffin, who once likened her songs to children set free in the world.

The first Velvet Underground record didn’t sell a lot of copies, but (so the legend goes) everyone who bought one started a band. The same is probably true of Patty Griffin. Not a lot of people heard “Living With Ghosts” when it came out, but many young women – including Jenee Halstead – did, and were inspired to buy a guitar and a notepad.

“I don’t think I started writing songs because of her,” Jenee says, “but I think she gave me the impetus to really get on my guitar and try to do some emotional mining.

Evan Brubaker is also a fan – he even named his recording studio “Forgiveness,” after a Patty Griffin song. “’Living With Ghosts’ is the chick singer bible,” he said recently. “The songs are simple but brilliant and universal. I don’t know how many copies of that record I have given away.”

Before coming to Seattle to work on the record, Halstead and Brubaker had long phone conversations about the “old timey” record she hoped to make. “I really trusted Evan,” she says. “Who he was at his core and his vision of music and why he’s doing it lined up with everything.”

A couple of things, however, gave her pause.

Songwriting, says Halstead, “is like entering a pitch black room, and the light may never go on. And to be honest, I don’t know if I want it to.”

Opening up such a dark and solitary process to another writer was a challenge. Megan Peters is both an accomplished lyricist and Evan Brubaker’s wife. She is also, says the producer, “one of the best co-writers in existence.”

But for Halstead, letting go was a challenge. “It was very hard at first to work with Megan,” she says. “She is a tour de force, so I was a little bit intimidated by her.”

“She is truly a master of the craft,” she continues. Peters has an ability to “look at it from all angles or take a song in a direction you would never have thought about in a million years.”

Brubaker’s biggest idea of all was perhaps the one that took the most getting used to.

Hearing that keyboard player Steve Moore would be available for a few days, Brubaker says, “I got a flash of how it would all come together.”

“Steve is brilliant. He has a collection of 80’s Casio keyboards, a bunch of guitar pedals, a little amp and a Fender Rhodes. He plays free jazz, hardcore, singer-songwriter…the guy is game for anything.”

“I couldn’t imagine how keyboards fit into the old-time sound,” countered Halstead.

“We started messing around with live drum samples for fun,” she says. “I said, ‘slam a crazy (Roots drummer) Questlove beat behind “Before I Go”’ – just as a joke.”

“I loved it. Over the course of the next 24 hours it opened my mind.”

Co-mingling beat samples with mandolins, dreamy organ excursions and Dobro flourishes is, to say the least, unconventional. But it infuses “The River Grace” with adventure and irreverence, transforming it from a merely good folk album to a pivotal record that comes along once in a generation to invent a new musical language.