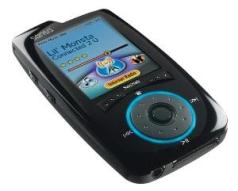 With the announcement of the Sansa Connect at the recent CES, Microsoft faces serious competition to the the much-hyped Zune. Two key differences in the Wi-Fi player are the focus on Internet radio, and a less DRM-crippled version of Microsoft’s much-hyped song sharing feature.

Microsoft doomed the so-called “community” aspect of the Zune at the outset, requiring that wirelessly traded songs first be purchased from the complicated, consumer-hostile Zune Marketplace, and limiting beamed songs to three plays before they were crippled. No surprise, then, that the Redmond giant announced yesterday that their iPod killer died last quarter. It lost, as my Canadian friends say, a WHACK of money:

The company is betting heavily on the consumer electronics business for future growth, and late last year it introduced a digital media player, Zune, which competes with Apple’s iPod. But Microsoft’s consumer entertainment and devices unit has contributes no profits yet, losing $289 million in the quarter.

Sansa’s device runs on Zing’s technology; their offering got a shot in the arm with the recently announced alliance with FON Networks which will provide free Wi-Fi access in several cities, which should make the Internet radio component much more valuable:

FON’s WiFi network is the largest in the world touting over 215,000 distinct WiFi hotspots, with over 17,000 in the U.S. alone. Hotspot providers are members (called Foneros) who share their unused bandwidth on a FON router in exchange for free WiFi access when roaming through any other FON access point. Through this partnership, consumers using ZING platform, software and services on their mobile players will have the opportunity to become free Foneros and have free unlimited WiFi access directly from their music players.

The only downside to the Sansa Connect is that there’s no explicit Rhapsody component. But the product spec sheet seems to say that the device will connect to any Plays-For-Sure service on the go. I would assume that includes Rhapsody. If this is so, then I’m even more excited, based on the Engadget CES demo showing some insanley cool features, like direct-to-device downloads, community friend finders and such.

This device itself isn’t news, and not just because this post comes two weeks after CES. Anyone with a Sirius Stiletto will recognize the design; SanDisk didn’t build it from the ground up, they simply licensed and re-branded Zing’s device.

Two complaints about this: The Zing device has 8 GB of onboard memory, the Sansa Connect only has four. SanDisk is touting the SD expansion slot, but as readers of this blog know, at the present time this additional storage will only work with non-DRM’d content, on the Rhapsody player anyway.  That kind of defeats the whole purpose of the extra space,  and makes we wonder why the Connect doesn’t simply ship with the full 8 GB.

It probably has to do with the fact that SanDisk’s main business is storage cards.  A company engineer told me a couple weeks ago that SanDisk is working on ways to make this extra capacity integrate with the device. I hope it happens before the Connect becomes available for retail customers in March.