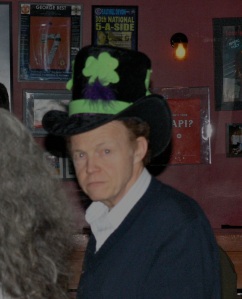 The lead-up to St. Patrick’s Day began in Lebanon Tuesday night with a performance by the Dublin City Ramblers.  The three-piece band scored an international hit with “Dublin in the Rare Old Times” in 1970 and, led by the picking and singing of Sean McGuinness, have been going strong ever since.

Their Opera House performance was, in the words of one audience member, “just like Dublin pubs in the 1960s,” filled with songs both sad (“Grace”) and spirited .  Finishing with a medley of the Irish national anthem (sung in Gaelic) and the “Star Spangled Banner,” the Ramblers headed over to Salt hill Pub.

Earlier in the evening, the weekly Irish Sessions, led by Chris Stevens and Roger Burridge, played in the center of the room.  Musicians improvising jigs and reels included Jeremiah McClane of Nightingale, and Krista Lampe of the Upper Valley Music Center.  Pints poured, and a Champions League football match between Juventas and Chelsea played in the background.

Ramblers guitarist/vocalist Derrick Keane sat down in the circle and was soon joined by McGuinness.   Even without a microphone, Keane’s voice soared over the crowded pub.  Later, bass player Tom Miller joined his mates, and three played past midnight, accompanied by two fiddles and a bodhrán.

Though typically less star-studded, the Irish Sessions are a weekly fixture at Salt hill, located on the Lebanon Green. 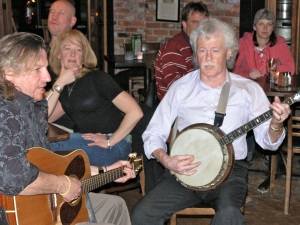 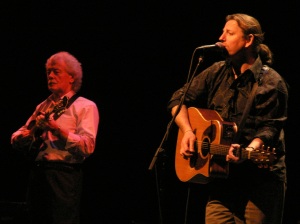 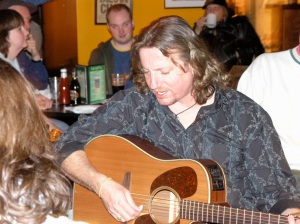