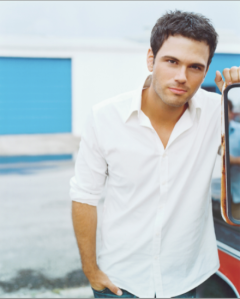 Though he’s out straight juggling gigs and learning to dance on national television, Chuck Wicks is in a breezy mood.

“My songwriting buddies are coming out to L.A,” says the rising country star, who has two hit singles, a top 10 album, and a new song heading up the charts.

At the moment, though, his mind is on fancy footwork.

During the first week of “Dancing With The Stars,” he and girlfriend Julianne Hough waltzed their way into the middle of the pack.  The couple is practicing hard for the second round, which starts Monday, with an elimination vote on March 17.

Hough is a two-time DWTS champion, but it’s all pretty new to Wicks.

“I have 5 days to learn how to salsa,” he says, but if Wicks is nervous, you’d never know.

“It always looks better than it feels,” he says with a laugh

“I just want to have a decent show and maybe win the thing.  But it’s only about 3 months, and then I go back to touring.”

“The music never leaves,” he concludes.

That’s where the focus will be Thursday night, when Wicks and his four-piece band perform at the Claremont Opera House.

The singer-songwriter tasted success when his debut single, “Stealing Cinderella,” went to number five in the country charts.

The song also caught the attention of Tennessee Volunteers then-coach Philip Fulmer, who declared – “it hit me like a ton of bricks.”

He asked Chuck to play it at his daughter’s wedding.

Says Wicks, “to have a song you wrote touch someone so deeply that they ask for you to perform on one of the most special days of their lives – that is incredible.”

Learning of Fulmer’s interest pleased Wicks – musicians love attention, after all – but upon reflection he realizes his initial response may have seemed a bit nonchalant.

“Little did I know he was Tennessee royalty,” Chuck says. “You don’t really know unless you’re in the state.”

Wicks was born and raised in Delaware, and went to the University of Florida with dreams of playing professional baseball.

But after arriving, he picked up the guitar.

“Freshman year, you don’t know what your major is gonna be,” he explains.

By the time he was a junior, Wicks had a record deal and was on his way to Nashville..

“The minute I got here, I got dropped by the label,” he recalls.  “But I dug in and got a job parking cars.”

He also worked with some of country music’s best songwriters.  Through the multi-year apprenticeship, says Wicks, “I really found out who I was as an artist.”

The success of “Stealing Cinderella” led to “Starting Now.” his debut on RCA Nashville.  For the album, Wicks selected a diverse mix of songs that reflected his own tastes.

“Growing up, I listened to R&B, pop, jazz and everything in between. I’m a big fan of music,” he says. He recently bragged in his blog about attending an AC/DC concert.

Wicks wrote all but one of the album’s 11 tracks, including arena country-rock (“All I Ever Wanted”), James Taylor-flavored folk pop (“When You’re Single”) and Brian McKnight-like country soul (“Mine All Mine”).

But his knack for tapping into universal emotions on ballads like “Stealing Cinderella” may lift Chuck Wicks to stardom on the order of Keith Urban or Brad Paisley (who he toured with in 2008).

The just-released single “Man of the House” tells the story of a 10-year old boy who wakes up early every morning to make breakfast for his sister and coffee for his mother.  He’s trying his best to stand in for his father, who’s serving overseas.

“It’s hard to be a kid when you’re the man of the house,” sings Wicks.

Co-written with Mike Mobley, Wicks says it “was a tough song to write.  We wanted to make sure to do this song justice because there are so many people who are living it.”

After playing it in concert, many teary-eyed fans have thanked him for telling their story.

“We’re gonna have a good time, and we’ll do a very intimate show, maybe have a little Q&A,” he says.  “Don’t be shy about shouting a song if you want to hear it.”