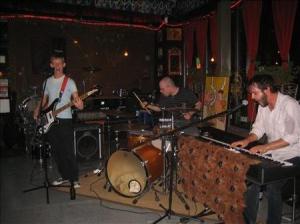 Modern rock fans will find a lot to like at the Imperial Lounge Friday, as three bands share the stage for a big night of music.  Each has its own unique style.  Keene-based Learn To Swim, with a pulsing, multilayered sound that recalls Smashing Pumpkins or Radiohead, opens the show.  Aldenbarton features piano-forward arrangements and two Claremont natives, while Low King has a reinvented style to go with their new name.

Aldenbarton front man Andrew St. Aubin is based in New York, but he’s excited about the hometown gig, the first he and (drummer and fellow Stevens High School alum) Jim Wood have played in 10 years.

Why so long?  “Basically, there hasn’t been a live venue for what we do,” says Andrew. “It’s awesome … I think the only better thing would be if it were an all ages show.”

Having recently changed their name from Lazy Day Puppet and moving from a jam band vibe to and edgier sound, Low King did a show at the Imperial and was surprised by a very large turnout.

Low King’s John Hudson and James Wood are old school chums; Hudson told him of the show’s success during a phone conversation, and Wood passed it on to St. Aubin.

“We were all kind of shocked by that,” Andrew says.  “Growing up in Claremont there was no live music to speak of.  We did alternative venues, bagel stores and coffee shops, playing for each other.  Now there was a place where we could actually play.”

“After hearing that we put a bug in John’s ear about wanting to do something, and he got a hold of us the next time he was putting together a night.”

St. Aubin left Claremont after he graduated from Stevens High School in 1998, and departed New Hampshire entirely in 2004 for New York City.  Initially, he played solo, albeit in a Howie Day way.

“When I got to the city, the friends I had that were musicians were already committed to other projects.  So I just wrote and recorded and mixed the backing tracks through an iPod,” he says.  “I played solo with an iPod for maybe 6 months.”

Eventually, “bands broke up, and I got my old pal Jim back,” he says.

Aldenbarton began life as a five-piece band – two guitars, bass, Wood on drums and Andrew on piano.  They were down to four members one night in Keene when their guitarist couldn’t make the gig.

“The response we got from that show gave us the confidence to keep doing it as a three piece,” says St. Aubin.  Their sound suggests piano power trios like Ben Folds Five, though they cite influences as diverse as the Beatles and Frank Zappa.

They released the digital-only “Exodus of the Eldest” EP last November.  A full-length record is in the works.

“We’re still coming into our own sonically and arranging things in a way that three people can carry,” St. Aubin says.