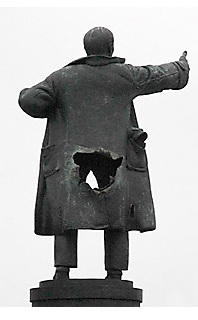 I think I found a music story to go with the picture of Lenin’s exploding ass.  OK, it’s a stretch, but you gotta admit, both of them are funny as hell.  Besides, both Lenin and Dylan can be described as revolutionaries with (how do I put this delicately?) posterior problems.

It seems the Bard of Minnesota has upset his Malibu neighbors:

Dylan, 67, who had the 1963 hit “Blowin’ in the Wind”, is under investigation by public health officials over whiffs emanating from a lavatory used by security guards at his cliffside compound at Point Dune, Malibu.

One couple, David and Cindy Emminger, claim the singer has ignored repeated requests to deal with the problem, forcing them to install five industrial-sized fans to divert the smell.

They claim that even the fans have not had the desired effect, as the Pacific breeze that sweeps across the area forces the odours back in their direction. “It’s a scandal – ‘Mr Civil Rights’ is killing our civil rights,” said Mr Emminger.

He alleged that the lavatory, which was installed on Dylan’s grounds six months ago, had made parts of his family home uninhabitable. He also claims his eight year old son has fallen ill from the fumes, which he describes as being from a “toxic, hazardous, carcinogenic chemical toilet”.

His wife told the Los Angeles Times. “I couldn’t figure out at first where the smell was coming from, until I finally noticed that they had moved the porta-potty directly in front of my front door. We both have allergies and are sensitive to chemicals.”

The newspaper claimed than a city public health inspector was sent to inspect the Dylan property in January, but was turned away and accused of trespassing by the security staff. Malibu Mayor Andy Stern said, however, that no other neighbours seemed to have experienced problems.

After a Sunday morning awash in news of lost jobs, foreclosures and other tales of economic despair, a thought occurred to me: what would Mickey Rooney do?

“Let’s put on a show!” he’d shout with a smile, and rally his pals to lose their blues.

The event, presented by Pentangle Arts Council, gathers performers of all stripes and ages together for a night of homegrown entertainment, co-hosted by Al Alessi and Bob Merrill.

“It’s a great mix of talent,” says Alessi. “There’s a lot of original stuff – from kids and adults who’ve been really crafting their métiers.”

Sharing the stage are comedians, belly dancers, jazz, rock and polka bands.  Merrill and Alessi move things along with a shtick that combines “Late Show” Letterman with Lake Wobegon, and adds an upcountry touch.

Pentangle calls it a “sugaring off party,” a celebration of the abundant talent located right here in our own backyard.

The show has evolved into one of Woodstock’s biggest nights, a focal point for school music programs.  “Kids have been working with their teachers all year,” Alessi says.

At the other end of the age spectrum are Net Protas, who Al describes as “very evocative of Hank Williams, Sr.” and Bess Klassen-Landis, a grandmother who’s performed multiple times and recent released a CD of her folk songs.

This is Alessi’s fifth year as host.  Before that, he performed with his daughter Elizabeth “Biz” Alessi, who sang her first show at age 9.

Appearing in the show can often be the catalyst for a musical career.   Roy Salguero began performing at the community talent showcase as a teenager.  He’ll enter the Berklee College of Music this fall.

“His chops have developed hugely,” observes Alessi. “For his first show, Roy was reading music during rehearsal. I promised him five bucks if he could come to the show and not have any sheet in front of him, and he did it.”

Laughs Al, “I still owe him the five bucks.”

“In the old days, in the depression era, people were their own entertainment,” says Alessi.  “In times like these, its’ value becomes even more important.”

With Mickey Rooney optimism, he concludes, “I feel really swell about this.”

Curtain time for “A Green Mountain Home Companion” is 7:30 Friday, at the Woodstock Town Hall Theatre.

What else is happening?

Thursday: Blue Note Records 70th Anniversary Tour, Hopkins Center – Unlike a lot of “all star” bands, this septet has played together for years, and recently completed “Mosaic: A Celebration of Blue Note Records” to mark this year’s tour.  Musical director and pianist Bill Charlap says they made the CD to “honor the label and its key players, whittling it down to eight of our favorites from Blue Note’s wide-ranging and extensive catalog,” including Herbie Hancock and McCoy Tyner.

Friday: Soul Octane Burner, Imperial Lounge – This week’s four-band show at Claremont’s musical hot spot is a study in intensity.  From Empire to Ruin play with staccato fury, Affliction features crunch, melody and X-rated lyrics, while Low King feature an edgier sound than their days as Lazy Day Puppet.  Headliner SOB’s long-promised CD should drop any day now.  Based on what I’ve heard on MySpace, it should be a tour de force.

Sunday: Joe Bonamassa, Lebanon Opera House – This guitarist opened for B.B. King at age 12, and worked with Eric Clapton’s producer (an experience chronicled in the 2003 documentary, “Tom Dowd and the Language of Music”). But don’t pigeonhole Bonamassa as simply a blues rocker.  His first hits came with a band that included the progeny of Miles Davis, Berry Oakley (Allman Brothers) and Robbie Krieger (Doors) – he’s an original musical voice.

Wednesday: Missy Higgins & Harlan Coben, Boston Public Library – Writer Coben employed the Aussie singer-songwriter’s hit “Where I Stood” as a key element in his last novel, “Hold Tight,” which led to this unique mini-tour of libraries and bookstores.  Coben reads (from the just-published “Long Lost”), while Higgins plays piano and sings – no word on whether any duets are planned.