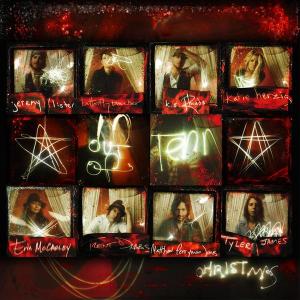 Every year at this time I tend to crank up the holiday music. My tastes run to tunes with roasting chestnuts, sleigh rides and flying reindeer, as well as subversive standbys like Jackson Browne’s “Rebel Jesus” and Steve Earle’s “Christmas In Washington.”

But somehow, the old songs aren’t singing like they used to.  After the year we’ve had, I’ve begun to wonder – is Santa Claus really coming to town?

Though I’m not curled up in a fetal position listening to “River,” a song like “Santa’s Lost His Mojo” is closer to my personal zeitgeist these days.

That cool Jeremy Lister track is one of many gems on “Christmas,” a new compilation from a group of Nashville alt-rockers collectively known as Ten out of Tenn.

Why’s it so hard to write a Christmas carol? With a few exceptions, most holiday music is either too earnest or just plain goofy.

But the original songs on the Ten out of Tenn disc evince a third way, which I think of as “sentimental modern.”

Well, except for one.

With lyrics describing a dispirited Santa “down in Mexico drinking tequila and wine,” “Santa’s Lost His Mojo” really is goofy – but in a modern way.

Other cuts on “Christmas” evoke the past while staying rooted in the present.  Butterfly Boucher contributes the Phil Spector-inspired “Cinnamon and Chocolate,” which both consoles and celebrates.

Trent Dabbs’ “Raise the Tree” exhorts, “bring the ones that you love just close enough” – but not too close at Christmas.

Who hasn’t felt like that during the holiday season?

“Christmas Time,” a beautifully melodic Andy Davis song, really hits the mark.  Davis observes that, for some people, Christmas “sneaks up on you like cold weather, whether or not you’re ready.”

Looking out at the milling masses, they only see what might have been – a great relationship ended, a dream that’s not coming true.

It’s at that point that emotions can tug equally towards despair and hope.

Celebrating with a backward glance is a form of moving forward.

Or as Davis eloquently puts it, “it heals and it hurts to remember.”

No wonder Nashville is such a songwriter’s Mecca – even the indies are poets.

“Christmas” is the third anthology from Ten out of Tenn, a project begun in 2005 to get the word about alt music in a town that’s known for country.

Check out their MySpace page, streaming most of the record.

And don’t miss these local events:

Thursday: Christmas Revels, Hopkins Center – Children’s tickets are only $5.00 for tonight’s performance of “The King and the Fool,” which plays through the weekend.  Much of the show’s charm can be found in the local energy that’s made it happen for the past 34 years.  The role of the King is played by film and television actor Alan Gelfant,  but most of the cast comes from the Hanover area.  Doing it for love – that’s my kind of music!

Friday: foreverinmotion, Chester Underground – Emo rocker Brenden Thomas’s stage name refers to his touring regimen, traveling the country and winning fans one at a time, club by club.  Vermont is Brenden’s home base (he helped start the Chester Underground in the basement of his favorite restaurant), so this gig should have elements of celebration that have nothing to do with the holidays. Brenden has a new collection of muisic due in March.

Saturday: Stonewall, Heritage – Speaking of hometown heroes, Stonewall is the de factor house band at this Charlestown second-floor bar, awkward shaped room and all.  It’s been a good year for Josh, Ryan and Phil, who (finally) released their first album, and learned to play “Mississippi Queen” – well that was good for me, actually, since I’d been bugging them to play that old Mountain song for awhile.

Sunday: O’hanleigh, Salt hill Pub – A Celtic Christmas performance, with a  suggested $5 cover to benefit the Leukemia and Lymphoma Society.  It’s also a Tuohy family event.   Brother Daniel, who’s very active with the charity, will stop by the describe the search for a cure for this disease.  Dan also is running for LLS in next year’s Boston Marathon, and God bless him for that.  Middlebury’s O’hanleigh, of course, plays real Irish music.

Monday: Rick Redington & the Luv, Uncle Iggy’s – A new performance space and Internet café, located on the second floor above the Pizza Jerks eatery, welcomes a hard-working, fun-loving band for music on what’s normally an off night.  I love one of the terms Redington uses to describe his band’s roots-y music – rastabilly.  A picture of Bob Marley with a banjo springs to mind.

Tuesday: Wrensong, Parker House – Sue Neighbor, Oliver Goodenough, Eliabeth Harley, Frank Fields, Helen and Dave Clark sing a mix of Christmas Carols and secular music from the Renaissance.  You can check out samples of Wrensong in all their a capella glory at Dave’s wonderful web site, yellowhousemedia.com. 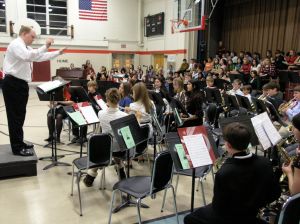 As she readied the chorus for the final selection of Tuesday’s Claremont Middle School “Holiday Highlights” concert, Ginny Formidoni mouthed one instruction, sotto voce, to her charges,

With good reason – at that point, nearly 175 student musicians were assembled, ready to perform a four-song medley of seasonal standards.  The throng included the combined 7th and 8th grade bands, and a large chorus drawn from singers of all three grade levels.

More impressive than the size of the gathering was the quality of the numbers played.  The one-hour show, led by band director Seth Moore and chorus conductor Formidoni, shed new light on some familiar favorites.  The arrangement of “Let It Snow” and “Winter Wonderland” as performed by the 7th and 8th grade chorus was bright and bouncy.

The CMS Jazz Band gave snap and swagger to and old standard with the recast “Swingin’ Jingle” version of “Jingle Bells.”

The evening began after Moore finished guiding the last of the band members to their seats, offering words of encouragement to each as they passed – “tuck the shirt in, looking good, lose the gum, you look great.”

There was lots of clapping, harmony and tradition in the combined chorus’s performance of “Children Go Tell It,” an energized gospel number written by Greg Gilpin.

The CMS Jazz Band’s three-song section included “Feliz Navidad,” much polished since their October workout with Arturo Sandoval.  Even two months after the famed trumpet player’s visit, Moore was still giddy about Sandoval’s time with the band prior to his performance at the  Hopkins Center in Hanover.

The Jazz Band’s version of “Go Daddy-o” was a concert highlight, with rapid syncopation, and a sharp call-and-response bridge straight out of Cab Calloway.   The well-practiced percussion section also delivered tight rhythms.

Samantha Perry and Victoria Webster each soloed impressively during the combined chorus performance of “Where Are You, Christmas?”  They received spontaneous applause midway through the song, first featured in “Dr. Seuss’ How The Grinch Stole Christmas.”

“We opened with our closer,” said Moore after combined 7th and 8th grade band played the quick-moving “Encanto.”

“A few sixth graders snuck in to the group,” added Moore, who then quipped, “I went to the University of Illinois, so I accept bribes.”

But the bargain struck was for talent, not money, as the ad hoc combined band shone for both songs, keeping up with a challenging musical chart during a medley of holiday classics.

Tuesday’s concert was another example of how the CMS music program continues to deliver impressive results, with high participation from an enthusiastic and talented group of youngsters.