There was a time not so long ago when a fine dining experience inevitably required a trip across the river. Oh, you could find a decent steak or a piece of fish in Claremont, but if you craved a dish that deserved to be photographed as well as eaten, you had to leave town.

Until Bistro Nouveau opened. Even then, it was a long shot. “Most restaurants close within three years,” says chef Doug Langevin. “You wouldn’t believe the number of people who told me this would never work here.”

But he was confident that the area was ready. “There had been a few in the past, like Annie McCassars,” he says, “and I always looked at Todafrali’s – they were a successful eatery, even if they weren’t doing what we were. “

“It’s a growing area, I knew there would be people here who would support us. I knew it was here,” he adds.

The challenge, Doug says, was “re-exciting them to come out and have dinner.”

Bistro Nouveau also bucked the odds through the support of Langevin’s family. His mother, father, sister,  and brother-in-law are all involved with the restaurant. He and wife Isabel couldn’t do it without them, he says. “Whenever something happens, there’s a family member to help out.”

This week, the restaurant celebrates its third anniversary, and shows no signs of slowing down. The locals embraced it heartily, but the surest sign of success is without a doubt the many Upper Valley and Sunapee residents who make a special trip to enjoy dishes like horseradish encrusted cod and their award-winning desserts.

On Saturday, up-and-coming singer-songwriter Brooke Brown Saracino appears, one of the many performers who’ve serenaded diners since Bistro introduced live music in late 2004. “People love the music and dinner ,” Doug says. Jason Cann provided a transcendent moment recently when he invited a friend up to sing. She started out slowly but by the third song, he says, “she was moving up and down the register like Christina Aguilera. People were clapping like crazy.”

Langevin is a local boy who got his start in the Sugar River Tech culinary arts program, and his hometown commitment is admirable. “I’m a big supporter of the tech center, I think it’s a great program,” he says.

He’s even given students there cooperative education opportunities at Bistro – the former pupil is now the teacher.

So, here’s to the faith that made it happen. Happy Birthday, Bistro Nouveau, from one of many grateful palates.

What’s out there to satisfy musical appetites in the coming days?

Friday: Nobby Reed, Middle Earth Music Hall – Another day, another delayed court date for Bradford’s music haven. Tonight, local hero Carey Lee Rush sits in with Reed, a sizzling blues guitarist who did time with the Rick Davis Band way back when. He and Rush were re-acquainted at the recent Davis Band reunion in White River Junction. Reed’s got a bit of Stevie Ray in him. It should be a hot night.

Saturday: Hexerei, Claremont Moose Lodge – A new venue for Claremont’s hardcore heroes, currently at work on a third album. Four songs are written, but they’re picking up the pace since “finally” signing a record deal . The band is relentlessly pursuing the next level of success, but they’re always top of the bill in their hometown. Hitchelfit, One Less and one more band also appear.

Sunday: A New Kind of Blue, Canoe Club – Thursday regulars at Sophie & Zeke’s, their traditional jazz and sultry vocals head to the Upper Valley for a three-hour Sunday set. Emily Lanier has a wonderfully relaxed stage manner, and the coterie of musicians she works with are smooth as maple syrup on pancakes. The band is winning new fans everywhere they go.

Monday: Little Steven’s Underground Garage Festival, Axis (Boston) – Mr. Van Zandt is a multifaceted guy. He plays with Springsteen, acts on the Sopranos, and emcees a rock and roll party with the New York Dolls headlining, supported by other rave-up stalwarts. It’s 1974 all over again. The Dolls’ recent comeback album is a pleasant surprise.

Tuesday: Jewel, Calvin Theatre – You either love her or … If you’re a fan, you cut her a ton of slack when she tries to out-wet T-shirt Fiona Apple. Jewel thanks Steve Poltz for writing her biggest hit, “You Were Meant For Me,” by bringing him along for this tour. I’m a big fan of him. Her, not so much. 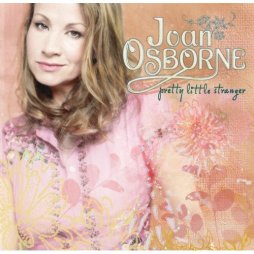 Joan Osborne’s latest CD is equal parts  homage to the canon of Americana songwriters and an old pro courting a stunning new muse; it’s also one of the year’s best records.  Conceived in New York and executed, with the help of ace producer Steve Buckingham (Dolly Parton, Shania Twain), in Nashville, “Pretty Little Stranger” walks the country/soul line with an agility not seen since Ray Charles  discovered George Jones.

In recent years, Osborne took a break from solo work and toured with the remaining members of the Grateful Dead.  She gives their “Brokedown` Palace” a plaintive tone missing in the original.  Patty Griffin’s “Silver Bell” continues to be the most-covered unreleased record in recent memory.  The Dixie Chicks, the Wreckers and Griffin herself have borrowed from it, though the original still languishes in A&M’s vaults.  Osborne’s version of “What You Are” is the best of the bunch.  Buckingham frames the spare precision of Griffin’s lyrics with delicate, yet majestic slide guitar and keyboard flourishes in the manner of the Eagles’ “Last Resort.”

Osborne channels Linda Ronstadt’s early Capitol releases on  a reverent reworking of Kris Kristofferson’s “Please Don’t Tell Me How The Story Ends,” a song that won Ronnie Millsap a Grammy in 1974, and “Time Won’t Tell,” with Vince Gill providing a silky harmony.  She also does a credible job with the tears-in-my-beer jukebox weeper, “Till I Get It Right.”

The tributes are good, but Osborne’s original contributions are superlative.  “After Jane” equates friendship and lost love – “I lie awake and wonder all night long,” she sings with tantalizing ambiguity.  “Who Divided” serves up a slice of the righteous rhythm and blues which drove mid-90’s hits like “Spider Web” and “Right Hand Man,” with studio veteran Michael Rhodes’ thumping bass line, smoky organ and a snarling, pained refrain.

The record’s centerpiece is the title cut, a song which depicts a self-destructive race away from lost love and into the lonely city.  Suggesting the darker side of Rosanne Cash’s modern country, it brims with vivid lines like “there is a Spanish boy who also rides the A train/I want to tag him like a tiger.”  “I wonder who will the next fool be?” sings Osborne, as she prowls the streets with a seemingly unquenchable desire.

A balancing act of unleashed libido and soul-searching regret fuels “Pretty Little Stranger,” a soulful fury slouching out of New York City’s dark avenues and into the neon of Nashville.  Seldom has so vast a distance been bridged so artfully.