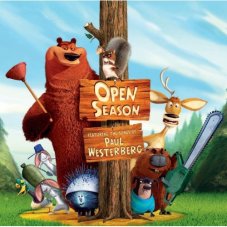 Alice Cooper once observed that writing simple songs is hard work. Two long-time practicioners of the craft are back on the scene with new albums. The Lemonheads and Paul Westerberg attempt to prove that axiom. One is successful, the other less so.

The Paul Westerberg-fronted Replacements were indie-pop darlings through much of the 1980s, famous for raucous performances and three-minute pop gems like “I’ll Be You.” Their irreverance was nearly as renowned as their music – they named one album (“Let It Be”) after the first song that came on the radio during a drunken ride home from a gig.

With his solo career, Westerberg has traded excess for a kind of punk elder statesman status. For his latest project, he’s headed down the same path as Jack Johnson and Ben Folds, scoring and providing the soundtrack for an animated film – the upcoming “Open Season.”

Only a couple of the soundtrack’s tunes seem direclty connected to the film. The rest could come from any Replacements disk. “Meet Me In the Meadow” leads the record off with Lennon-esque harp and bouncing guitar. “Right To Arm Bears” is wonderfully dumb, with lines like “Mr. Bruin, whatcha doin?” The most buoyant of the bunch, “Love You in the Fall,” represents a band reunion of sorts, with Tommy Stinson contrbuting bass and harmonies.

Westerberg’s well-turned phrasesn give “Open Season” its’ charms. “Better Than This” starts with the glib, “I’m a knight in shining armchair/I’m a guy who’s got it made,” accompanied by pennywhistles and goofy, sing-song harmonies..

The moody “I Belong” is done twice on the record, first by a Plastic Ono Band-inspired Westerberg and then starkly by Pete Yorn. Westerberg’s “Wild As I Wanna Be” is covered by Cake spinoff Deathray, who also contribute their own “I Wanna Lose Control (Uh Oh).”

Inspired by recent parenthood, Westerberb brings a child-like exhuberance to the project. Most of the songs were written after he previewed the CGI film, Sony’s first full-length animated feature. But the album isn’t a simple souvenier of a kid’s movie. It’s as a spirited as anything in Westerberg’s catalog. With the innocent beauty of songs like “Whisper Me Luck” and “I Belong” it’s in many ways even better.

The latest reconstitution of Evan Dando’s Lemonheads might better be termed “Descendents Plus One,” as he’s joined by that band’s Bill Stevenson and Karl Alvarez. Their contribution, along with guitar work on a couple of tracks by J. Mascis (Dinousaur Jr.) give the eponymous record a punkier edge, often to its detriment.

When the formula works, there are few craftsmen deft as Dando. “Become The Enemy” is an almost perfect distillation of pop and angst, one that sits right alongside such gems as “If I Could Talk I’d Tell You” from the mid-90’s gem “Car Button Cloth.” “Let’s Just Laugh” hints at the same genius, but sputters when it tries to be too many things at once. Broken into three distinct components, the main chorus does feature a classic bit of Dando wordplay: “Let’s just laugh/We can never do anything about anything anyway/Whatever will be/I guess we’ll see/let’s just laugh.”

The record is split into happy-go-lucky pop songs and pre-punk double time; the two melt together in “Poughkeepsie” and “Black Gown,” which leads off the record with slashing guitar chords and feedback reminiscent of the Dead Boys’ “Sonic Reducer..” Oddly, the Band’s Garth Hudson has a keyboard credit on the song; it’s an open challenge to the best set of ears to identify it.

The melancholy “ Baby’s Home,” with ironic music box chimes leading in to a crushing tale of marriage gone woefully wrong, is a little too literal, with a clunky chorus and odd synchopation. “In Passing” has the clever opening couplet, “time goes by so very slow when you are fasting,” but like most of the record, it twirls out of control before too long.

Simple songs, at least the good ones, are distinct and memorable. That’s the main complaint to level at “Lemonheads” – it’s well crafted, but with the exception of “ Become the Enemy,” it gone ten seconds after the song ends. Dando’s best work has an insinuating quality that’s missing here. It’s punky, frenetic and forgettable.

That absence becomes all the more clear when considering Paul Westerber’s return to form. “Open Season” has plentiful hooks, and words that are easy enough for preschooler to learn. For parents, that may be both a blessing and a curse. For pop fans, it’s bliss.