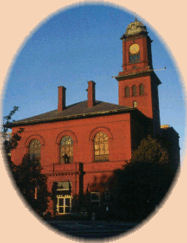 Then the thespians take over, when the Jane Austen classic “Pride and Prejudice” is presented for two nights, October 13 & 14, by the award-winning (and locally-based) Performer’s Playground ensemble. In November it’s all local talent, as “A Funny Thing Happened on the Way to the Forum” plays six times over two weekends, including a Sunday afternoon show on November 5.

Named along with Stephen King and Andrew Wyeth as one of the most “memorable Mainers of the 20th century,” David Mallett brings his easy folk singing style to the Opera House November 25. It’s a fitting resumption to music – among the many artists who’ve recorded Mallett’s songs is Hal Ketchum.

Familiar family fare dominates in December, with Performer’s Playground’s Peter Pan (a lot of alliteration!) and the New Hampshire School of Ballet’s production of the Nutcracker Suite.

Comedy cures the winter blues, and two shows have me personally quite excited. Bob Marley offers “high energy, offbeat observations” January 7. Robert Dubac performs his one-man show, “The Male Intellect: An Oxymoron?” February 8. I’ve seen it, and Dubac’s stand-up routine, several times. His intelligent, witty humor never gets near the gutter. You owe it to yourself to check it out.

For children, there’s a series of morning shows scheduled, with tickets a modest five dollars. C.S. Lewis’s “The Lion, The Witch & The Wardrobe” happens October 11. “School House Rock,” an on-stage re-creation of the hit television show, plays November 15, with “The Mixed-Up Files of Mrs. Basil E. Frankweiler” set for December 13.

Three more kid’s shows are set for early next year, along with the family-pleasing Trent Arterberry in March. For 2007, there’s also a modern dance program, old time radio comedy, the gender bending “Female Odd Couple, chamber music with the Portland String Quartet, and “guitar wizard” Joey Leone pays tribute to guitar gods like Hendrix, Page and Clapton in a show in early May.

All in all, it’s a nicely varied season, with tickets mostly in the twenty-dollar range. For the near term, here are some entertainment choices to consider:

Thursday: Pat Green, Pearl Street Ballroom – I know, gas is expensive and Northampton is a long drive – believe me, this show is worth it. Green plays hockey rinks in his home state of Texas, but he hasn’t conquered the nation yet. That’s just a matter of time. Songs like “Don’t Break My Heart Again” and his new single “Feels Just Like It Should” have a Mellencamp vibe mixed in with the twang.

Friday: Sirsy, Salt Hill Pub – A two-person band with a HUGE sound. Singer/percussionist Melanie Krahmer sings like Fiona Apple after the Prozac has worn off, and guitarist Rich Libutti might as well have four arms for all the wonderful noises he produces. Salt Hill continues their reign as the top stop for original talent. My next two picks are bands that are both due into the Pub next weekend. That’s almost an unfair advantage.

Saturday: About Gladys, Seven Barrels – My former guitar teacher Wally Wysk and Wherehouse founder Rich Thomas front a band known for their tasteful readings of the classics. Moby Dick, the Great Gatsby, Wuthering Heights. Wait, I meant “Some Like It Hot,” “All Right Now” and “Play that Funky Music.” The dime-sized dance floor should be cheek to cheek for this night.

Monday: Oneside, Proctor Academy – I live for surprises like this band. Hailing from Boston, this original four piece features the first electric banjo I’ve seen, in a band anyway, since the Dixie Chicks arrived on the scene 10 years ago. Steeped in Americana and alt-country traditions, singer Ned deBary will remind you of Wilco’s Jeff Tweedy, but their sound is all their own. If you can’t make it all the way to Andover (NH) for this show, check them at Salt Hill next Saturday.

Tuesday: Tyrone Wells, New England College – How a band this funky (from Southern California, of all places) found their way to Henniker is a question for another day. They’re playing a bunch of free college shows, including another stop at Colby-Sawyer September 21. Wells cites Stevie Wonder and Patty Griffin among his influences, which makes sense – just like those two, his voice soars over whatever arrangement his band plays.

Finally: Good luck to Hexerei, playing at Mark’s Showplace in Bedford tomorrow for a chance to open the Family Values Tour at the Tweeter Center.